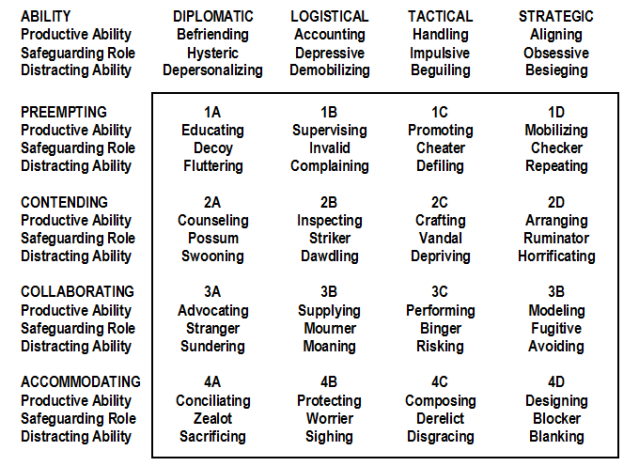 The above is a frame of coordinates with column factors that intersect with row factors resulting in INTERSECTION variants.  Each variant is unique. Thus, consider intersection 1A, Diplomatic Preempting. Note how different it is from, say, intersection 4A, Diplomatic Accommodating, and how different it is from intersection 1C, Tactical Preempting.  All sixteen defensive roles and rituals differ in ways that are easily distinguished by those present when such behavior is displayed.

Here are sixteen differing ways of working each of which is linked to a relevant objective. Some of us are more able to do diplomatic enabling, others logistical saving. Likewise, some of us are more able to do tactical handling, others strategic aligning. None of us can do all ways of working equally well. Those most capable at diplomatic enabling are least capable at tactical handling and vise versa. Likewise, those most capable at logistical saving are least capable at strategic aligning and vise versa. Those who find and practice their work-of-best-fit are fortunate indeed.

Dr. David Mark Keirsey is a scientist that is interested in how and why the world works. The first half of his professional career was as a Computer Scientist, specializing in Artificial Intelligence. Notably, he was part of a team who created the software for the first operation of an autonomous cross-country robotic vehicle. In the current latter part of his career, he has broaden his interest to include all of science, mathematics, computation, and the history and future of the world. His plan is to write at least three books, two of which are tentatively called Mathematics Itself and Existence Itself. The third is a book on Leadership. Currently he is part of a web-based company, Keirsey.com to develop interactive team and human personality tools based on his father's best-selling work on human temperament. He is a Architect Rational in temperament.
View all posts by Keirsey →
This entry was posted in theory and tagged ability, Depressive, human ability, Hysteric, Implusive, keirsey, madness, Obsessive, personality, rituals, roles, temperament. Bookmark the permalink.