The Pillars of Madness: Part I, Temperament Base of Madness

THE PILLARS OF MADNESS

There are four extraordinarily useful ideas amid the massive tangle of publications on madness, these contributed by four men of genius in the practice of studying and changing seemingly irrational human actions— 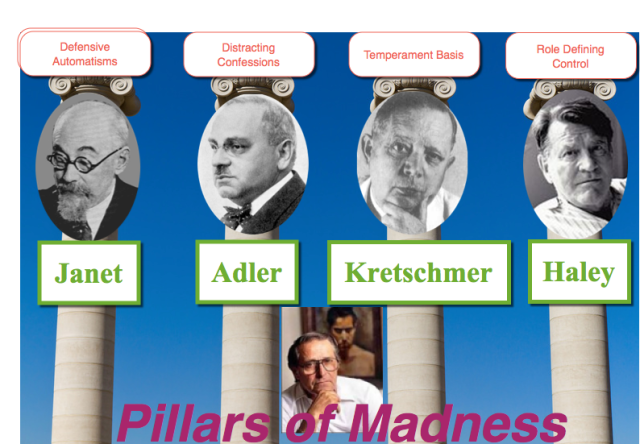 [1] The Temperament Base of Madness

We first began to understand madness in the middle of the 16th century. Before that time madness was believed to be due to godly whims, or to the influence of stars and planets, or to the workings of the Fates, or to the malfunctions of the flesh. Paracelsus, a 16th century Swiss medic, in his book Diseases that Deprive Man of His Reason (1567), said “we must not forget to explain the origin of diseases which deprive man of his reason, as we know from experience that they develop out of man’s disposition.”  In claiming that “disposition” (character) pre-determines both the form and function of unreason, Paracelsus was harking back to Hippocrates, the Greek medic who first tied madness to temperament. Twenty four centuries were to elapse before Hippocrates’s idea bore fruit. In 1920 Ernst Kretschmer, a German medic, told us that there were four forms of madness, each determined by temperament—Hypomanic (Impulsive), Melancholic (Depressive), Hyperesthetic (Hysteric), and Anesthetic (Obsessive).

Dr. David Mark Keirsey is a scientist that is interested in how and why the world works. The first half of his professional career was as a Computer Scientist, specializing in Artificial Intelligence. Notably, he was part of a team who created the software for the first operation of an autonomous cross-country robotic vehicle. In the current latter part of his career, he has broaden his interest to include all of science, mathematics, computation, and the history and future of the world. His plan is to write at least three books, two of which are tentatively called Mathematics Itself and Existence Itself. The third is a book on Leadership. Currently he is part of a web-based company, Keirsey.com to develop interactive team and human personality tools based on his father's best-selling work on human temperament. He is a Architect Rational in temperament.
View all posts by Keirsey →
This entry was posted in Introduction and tagged Depressive, Hysteric, Implusive, keirsey, Kretschmer, madness, Obsessive, Paracelsus, personality, temperament. Bookmark the permalink.

6 Responses to The Pillars of Madness: Part I, Temperament Base of Madness